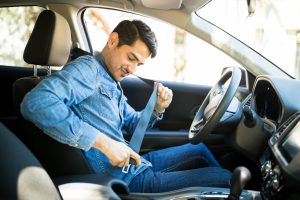 A few examples of these defects are:

False latching is a situation in which a user inserts the tongue into the buckle and believes the buckle is fully engaged when it is not. This belief is generated by the resistance felt by the user. If an accident occurs when the seatbelt is in the false-latch position, the occupant will be effectively unrestrained, and any force exerted on the belt will pull the latch plate out of the latch.

There are countless cars in America that have seat belts with the release button on the front face of the buckle. In some collisions (frontal, rollovers, offset frontals, and some side impacts), the release mechanism can be disengaged by the forces generated in accidents when the back of the buckle hits part of the seat structure or part of the human body or is simply subjected to forces and gravity in certain rollover events.

The lap belt is only seen in the back seat of some vehicles, and it fails to restrain the top portion of a person’s body when frontal collisions occur. Lap-only, two-point seat belts fail to restrain the upper torso. This can lead to fatal internal injuries, spinal damage, facial fractures, brain damage, and death.

Seat belts are designed to lock when the vehicle experiences a certain level of deceleration, such as that associated with a crash. If the seat belt does not lock up properly, then there may be a problem with the seat belt retractor.

Call (361) 733-3003 or contact us online to schedule a free consultation with our Corpus Christi seat belt defect attorneys.

/
Get started with a free consultation
Contact Us today